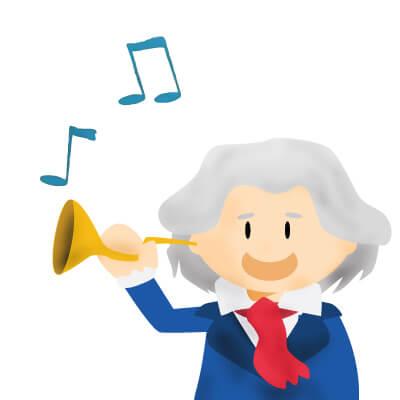 Hearing loss is not merely a modern problem. Since hearing loss often occurs with aging, it's something people have always struggled to overcome, and the history of hearing aids stretches back hundreds of years.

In fact, hearing aids have gone through so many transformations over the years, it is difficult to pinpoint a specific person who invented the hearing aid. Many hands and minds went into what we now know as a hearing aid.

Below we've outlined a brief history of hearing aid technology:

In the 17th century, French mathematician Jean Leurechon described ear trumpets in his work Recreations mathématiques. It's the earliest known mention of the devices.

These devices didn’t work very well and don’t seem to have been very popular during that time period.

By the 18th century, ear trumpets were more widely available to those with hearing loss than they had been in the previous century, and by the 19th century, people were using them regularly enough to start experimenting more widely with design, even making ear trumpets into fashion pieces.

Manufacturers began making wearable hearing aids, using headbands or hats to keep the hearing device in place, and many included clever designs that tried to hide the hearing device so no one knew you were wearing it! Though, considering how large the ear trumpets usually were, it wasn’t a terribly successful endeavor.

In the early 1800s, the inventor of the metronome, Johann Maelzal, designed ear trumpets for his friend, Ludwig van Beethoven. Beethoven owned several ear trumpets, but unfortunately, the devices either did not work well enough to improve his hearing or his hearing loss was too severe for them to help.

If Beethoven’s ear trumpets interest you, you can still see them on display at the Beethoven-Haus Museum in Bonn, Germany.

At the end of the 19th century, the first electronic hearing aid patent was filed, but they wouldn't be widely produced until the 20th century.

In the 20th century, hearing aid design progressed with the production of the electronic hearing aid. While Alexander Graham Bell wasn't directly involved with the invention of this new electric hearing aid, the technology used to create the telephone was utilized in developing the pioneering devices.

Despite the technological advances, however, these new hearing devices were found to be ineffective in treating serious hearing loss, and the first models were bulky, inconvenient, and too expensive to be purchased by most consumers.

The vacuum-tube hearing aids were smaller and more portable than previous models of hearing devices, but the hearing aid still wasn't convenient and wasn't easy to carry around with you.

With these smaller hearing aids came the Behind-the-Ear (BTE) and In-the-Ear (ITE) styles of hearing aids that we still use today. The same sort of analog technology that was used in these older models—while not as common as digital at this point—can still be found in use today as well.

And that was the real beginning of many of the digital hearing aids on the market today.

From the 1980s to the present day, digital hearing aids have advanced by leaps and bounds. Sound quality improves all the time, as do technologies that reduce noise and better target your hearing.

Hearing aids now include a variety of features, and you can choose from an array of colors, designs, and types. Plus, they’re much more discreet than the old, clunky devices that used to be on the market.

Hearing aids of the past were often prohibitively expensive. Now there are hearing devices available to fit any budget, and you don't have to visit a doctor to get hearing help: you can order your hearing aid online or over-the-phone and have it shipped right to your door!

The HCRD recharges with a charging station—simply drop the hearing aid into the station and your hearing aids are fully recharged in about 3 hours. The HCR3 charges using a cord—plug it in, charge for a couple of hours, and you're ready to go.

You can even buy hearing aids that you can control with your smartphone. What a leap in technology from the 1980s!

If you are considering purchasing a hearing aid, or if you have any questions, give Advanced Affordable Hearing a call at 1 (800) 804-0434.