Why Are Two Hearing Aids Better Than One? 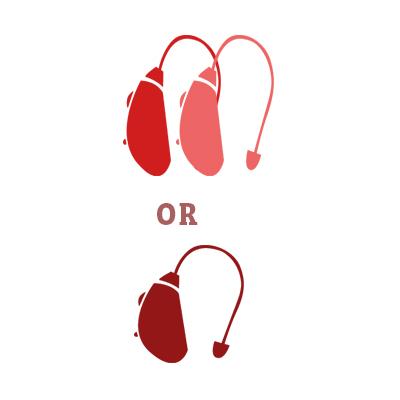 Current statistics show that hearing loss around the world is on the rise. In fact, over the last 30 years in the U.S. alone, the number of people with hearing loss has doubled to an estimated 34 million. A more disturbing trend may be that more young people each year are being diagnosed with hearing loss due to reasons such as noise exposure and the increased use of personal listening devices. These are just some of the reasons that we at Advanced Affordable Hearing have made it our mission to help people hear better, and for a lower price.

As a hearing aid company, one of our most frequently asked questions is: “Are two hearing aids better than one?” In most cases, the answer is a simple 'yes.' However, there are many scenarios, such as convenience, cost, or hearing loss in only one ear, that may drive an individual to wear only one hearing aid.  But in reality, most people should elect to wear two hearing aids instead of just one. Here's why.

The Science Behind Why Two Hearing Aids is Better

Our brains are designed to use both ears to fully understand our surroundings. Generally speaking, hearing instruments work best in pairs to deliver the optimum hearing experience.

The ears are like muscles: If you don't use them properly you may lose the ability to clearly understand speech with the non-hearing aid ear. Doctors call this 'auditory deprivation effect,' and it can lead to aggravated hearing loss in the ear that does not utilize an aid. It is not uncommon for individuals wearing only one hearing aid to develop loss of hearing in their good ear over time, as it overcompensates to offset the poor ear.

The ultimate goal of hearing aids is not just to send sound into the ear: It is also essential to keep auditory nerves engaged and retrain the central auditory system in the brain. Since, most hearing impairments affect both ears you’re shortchanging one of your ears if you opt for a single device.

At Advanced Affordable Hearing, we offer reasonable priced hearing aids for customers like you. Visit our Online Hearing Check, or call one of our friendly representatives at 1 (800) 804-0434, to get a general sense of your hearing loss. Once you've determined that, you can order the hearing aids that will work best for you.

If you have any further questions, contact us now.

For more information about hearing aids, and the best practices for purchasing them, read our posts: