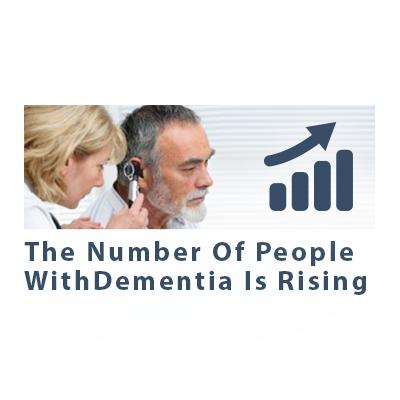 Hearing loss is generally perceived as an almost expected part of the aging process. In fact, by the time Americans reach their 70s, almost two-thirds of them will have some level of significant hearing loss. Dealing with hearing loss alone can be troublesome in the best of times, but now we are learning that there may be a strong connection between hearing loss and deteriorating cognitive brain health as well. Recent findings by Dr. Frank Lin, an otologist and epidemiologist at Johns Hopkins University in Baltimore indicate that this relation between dementia and hearing loss, while very strong, may ultimately lead to a silver lining - an increased focused on treating hearing loss and how it can help delay or in some cases even halt the onset in dementia for at risk patients.

There are multiple theories indicating that the effect of hearing loss on the decline of mental health and dementia is significant. One recognized risk factor that scientists have long known is the effect of social isolation on those with hearing loss. When a person has trouble hearing, it becomes a natural tendency for them to try and avoid situations where conversation is normally present.

Another theory implies that the cumulative effect on the brain caused by the effort to decode sounds over a period of time becomes overwhelming to the brain, thus leaving it more vulnerable to mental disorders such as dementia. Research also suggests that these effects may cause an actual physical change on the brain in terms of brain atrophy. More specifically, it appears that individuals with impaired hearing could be losing more than an additional cubic centimeter of brain tissue through atrophy each year compared with those with normal hearing.

Furthermore, it appears that the degree of hearing loss present has a direct correlation as well. For example, those with mild, moderate, and severe hearing loss increase their risk of developing dementia over time by twofold, threefold, and fivefold, respectively. In other words, the more hearing loss a person has, the higher their likelihood of experiencing cognitive decay.

Dr. Lin's 2013 study tracked the overall mental abilities of nearly 2,000 older adults with hearing loss. He found that after 6 years, those with more severe hearing loss were 24% more likely to experience diminished cognitive function. This data suggests that by aggressively treating hearing loss as it develops, there is an increased possibility that cognitive mental decay and the onset of dementia can be delayed or potentially avoided altogether. That is the key takeway from this discussion because although most medical professionals know that hearing loss can result in cognitive problems, they still don't focus on it as a priority when evaluating someone with suspected dementia. This is a big missed opportunity because it appears that the benefits of treating hearing loss problems as early as possible are twice as large as the benefits from any cognitive-enhancing drugs now on the market that treat dementia. In other words, hearing loss treatment including the use of hearing aids should be the first thing focused on.

For more information about Dr. Lin's study and the link between hearing loss and dementia, here is some additional reading;

Are You At Risk For Hearing Loss?

Below is a list of some common symptoms associated with early stages of hearing loss. If you have experienced any of these symptoms, you may have a hearing problem that can be improved with the use of a hearing aid. Please note that the diagnosis of hearing loss DOES NOT mean that a person is certain to develop dementia, however we encourage people to visit a hearing professional to learn the most effective ways to treat hearing loss and maintain quality of life.

For more information about hearing loss, review these articles;

Although often referred to as senility, the medical diagnosis of dementia describes a broad category of brain diseases that cause a long term and progressive decrease in important mental functions including the ability to think and remember. Generally, these affects have a negative chronic impact on a person's daily functioning and symptoms will continue to worsen over time. Diagnosis requires a significant change from the mental functioning that the person has displayed previously and at a pace greater than expected simply due to aging. Alzheimer's disease is the most common type of dementia and occurs in 50% to 70% of cases. 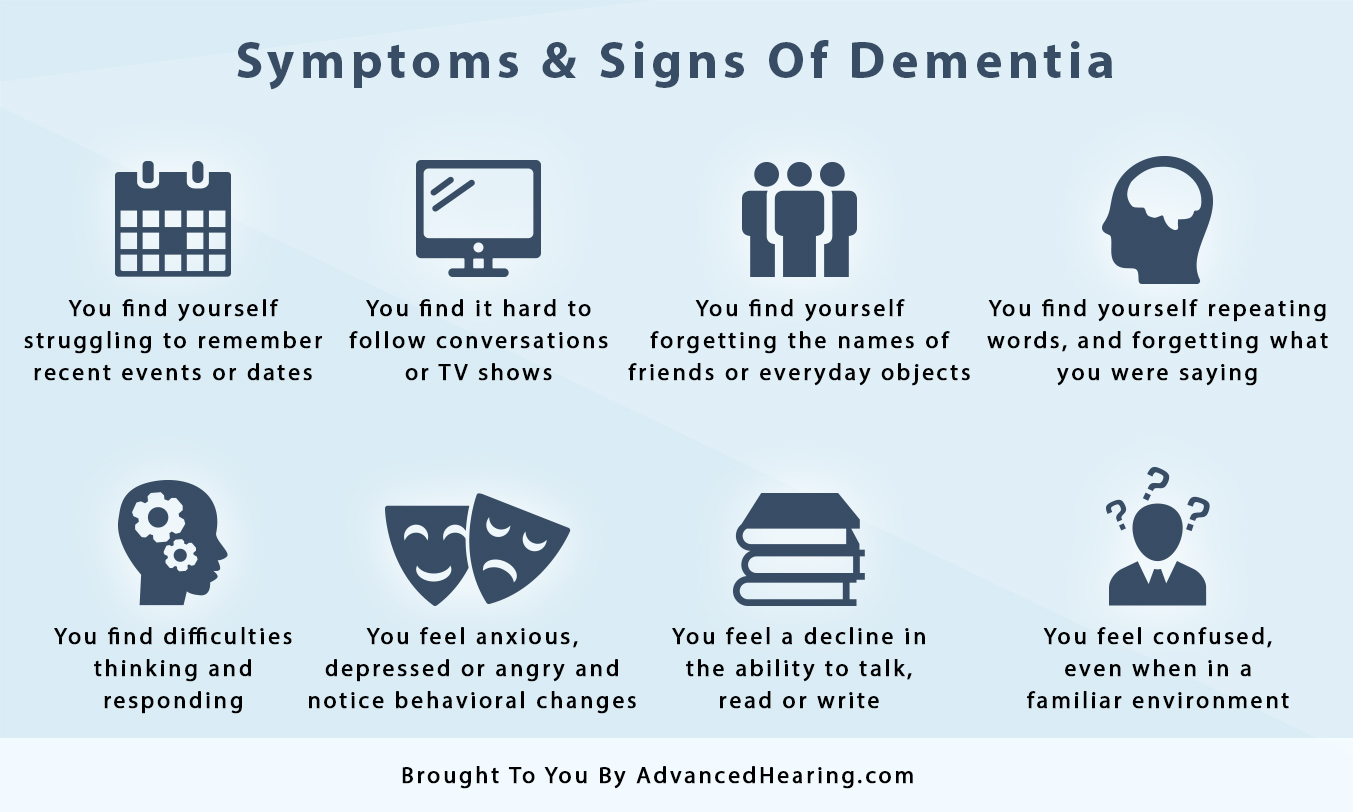 While the affects of advanced stage dementia can be debilitating for the affected person, there is an equally devastating impact on their loved ones as well as they experience the gradual mental deterioration of someone that has been close to them for long periods of time.

Currently there are no treatments available that can reverse or halt the progression of dementia, however it is possible to improve symptoms and slow its progression through the use of prescribed medications. Also, by engaging in proactive mental exercises designed to stimulate cognitive functioning, it is possible to help improve the quality of life for those that suffer from dementia.