Hearing Loss is the Top Disability Among Veterans 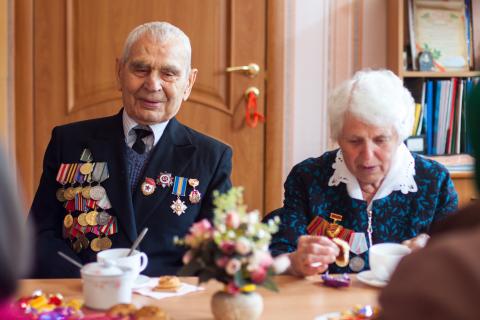 What’s an invisible disability? It’s one that cannot be easily identified from merely looking at someone. Hearing loss is one such disability.

More than likely, you can’t identify a person as hearing impaired until you talk to them. With over 35 million Americans diagnosed with hearing loss, it should come as no surprise that hearing loss is the most common invisible disability among veterans.

In fact, almost 300,000 veterans have been diagnosed with hearing loss that resulted from their service, according to Veteran Affairs (VA).

If you, or one of your loved ones, served in the military, and you suspect hearing loss, continue reading to learn more about how hearing loss most often impacts veterans.

#1) Tinnitus is the number one disability among veterans.

According to the VA, tinnitus is the most common disability among veterans, surpassing even PTSD (post traumatic stress disorder). Tinnitus is often described as ringing, buzzing, or a high-pitched whistling in the ears.

Although it is not considered a form of hearing loss, it can certainly affect one’s ability to hear. While the cause of tinnitus is not always known, for most veterans, it is typically the result of noise exposure during combat.

#2) Veterans with tinnitus can suffer from anxiety or depression.

The VA encourages veterans with tinnitus to seek assistance and learn how to manage their reactions to it. Tinnitus should be taken seriously, as it can lead to mental health issues, including depression and anxiety.

In fact, a study was conducted in 2015 in order to explore the connection between tinnitus and mental illness among veterans, and of the veterans with tinnitus, 70.1% had anxiety, 59.3% had depression, and 58.2% suffered from both anxiety and depression.

Depression isn’t just a side effect of tinnitus: It can also be caused by hearing loss. Research has confirmed the connection between hearing loss and this mental illness. Learn more >>>

#4) Blasts are a leading cause for hearing loss among veterans.

As noted, those who served in Iraq and Afghanistan have a higher likelihood of experiencing hearing loss because of the frequency of blasts utilized in these war zones: These blasts are known to cause hearing loss.

As a sound well above standard listening levels, blasts can cause noise-induced hearing loss. Blasts can also lead to other injuries that cause hearing loss, including traumatic brain injuries (TBI). Of the veterans who visited a VA clinic in 2012, 31.3% with a TBI reported hearing loss.

Most veterans have been exposed to dangerous sound levels, from gunshots to blasts. As a result, many veterans experience noise-induced hearing loss. Learn more >>>

#5) Some veterans suffer from hearing loss caused by medications.

Some hearing loss among veterans is not directly caused by warfare. In fact, some veterans experience hearing loss as a result of taking medications for other health issues, particularly ototoxic drugs, which are known for causing permanent hearing loss.

Cisplatin is a common ototoxic drug used for chemotherapy. In 2015, a study tested an ototoxicity identification device’s potential to reduce the potential for hearing loss among veterans undergoing cisplatin chemotherapy, and the results revealed the device as a success.

How can a veteran seek help for hearing loss?

While hearing loss is common among veterans, TRICARE (the insurance for active and retired military) only covers hearing aids for those with hearing loss that meets a very specific criteria. However, even mild hearing loss has the potential to negatively impact one’s quality of life.

If you, or your loved one, is a veteran that needs to treat their hearing loss or tinnitus, a hearing aid from Advanced Affordable Hearing may be the answer you’ve been looking for. Our mission is to help people hear better at a price you can afford, and we want to help you.

To get started, visit our Online Hearing Check, or call one of our friendly representatives at 1 (800) 804-0434, to get a sense of your level of hearing loss and select the best hearing aids for you.

Have questions? We’re happy to answer them. Contact us now.

Read more to learn about improving your hearing with hearing aids: